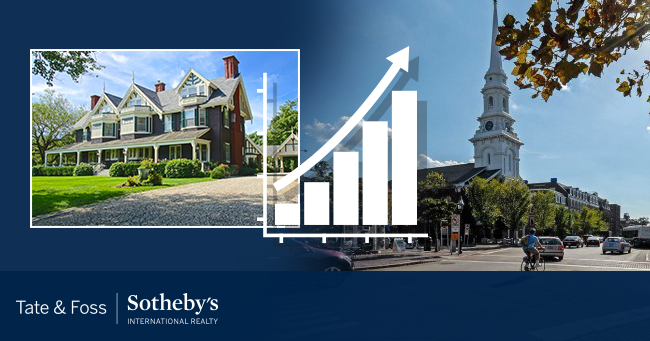 The housing market can be temperamental, dependent on numerous economic and cultural factors. However, the current state of our local market gives reason for optimism.

Spring and Summer 2015 were active seasons in the Seacoast NH housing market including a record-setting July, as heightened demand boosted sales ahead of last year's levels. In fact, sales mirrored 2002 levels, some of the highest in recent memory.

This may be influenced by the continued improvement of U.S. consumer confidence, which in August was at its highest level since 2007. Consumer confidence is a key underpinning of the housing market and this rise has certainly helped propel our markets forward.

Another factor may be that while the U.S. and New Hampshire economies are generally performing well and are expected to do so through next year, the Seacoast NH economy is outpacing both!

It shows one of the strongest rates of population and future job growth, with Portsmouth adding jobs at more than twice the state rate. The city's unemployment rate is also lower than the surrounding area, coming in at 2.6% as opposed to 3.3% for the Seacoast region and 3.7% for the state as a whole. Pease International Tradeport's contribution to the local tax base is a phenomenal excellent example of public-private partnership.

As a result, the Seacoast housing market has fully recovered and the sales pace is healthy and sustainable. We seem to have reached our new normal; it is not an exuberant pace, but it is robust. In fact, the region's median sale price hit a new peak and is outperforming the rest of the state. And the effective inventory in the Seacoast area has thinned; it would take eight months to sell off existing inventory at the sales pace of the last 12 months. All good signs!

In August and September, volatility in the stock market and overseas economic issues reintroduced a slight hesitancy among some buyers, which may be reflected in fourth-quarter closed sales.

There are also some concerns about balance and long-term health in the market. Affordability is keeping some people out of the purchase market, which will become a bigger issue if rates rise.

The rental market is strong (rates never dropped) however, a majority of Seacoast renters pay more than a third of their income for rent. Rising costs are a major issue for young people who are already burdened with student loan debt and low wages.

Housing starts have remained low. The cost of new construction has risen and the gap between the cost of existing inventory and new construction has widened. Also, home design trends favor smaller houses, which makes sense as you consider our aging population and concerns about energy efficiency. But this begs the question: who will buy our big houses in the future?

Despite these few concerns, we remain optimistic. We are happy to report that our markets are functioning efficiently overall with sustained demand and well-qualified buyers. The Seacoast market is on track to set annual sales volume and price appreciation records this year.

With historically low-interest rates and the Fall seasons slower seasonal trend, the area offers a solid investment opportunity. Its a great time for savvy buyers to jump in! We are hopeful that the remainder of the year will result in greater absorption of the current inventory to end 2015 on a high note.