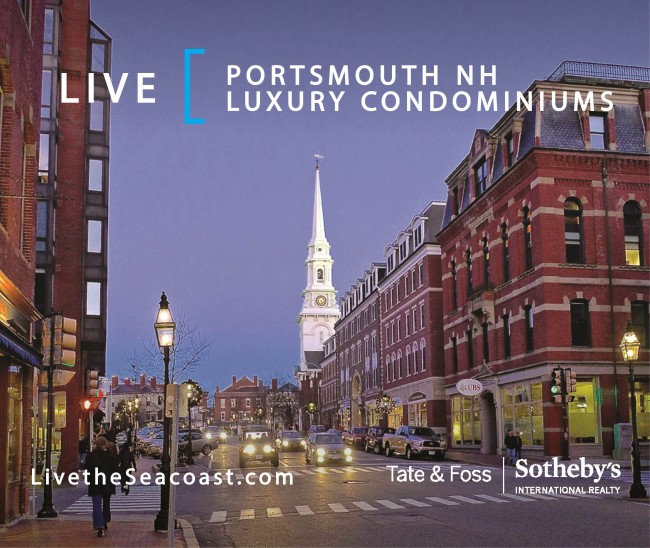 Portsmouth is the crown jewel of the Seacoast, offering a perfect combination of historic charm and vibrant urban life. Coastal Living magazine recently included the Port City on its list of coastal dream towns to visit or live, noting, "Unlike Nantucket and Cape Cod, Portsmouth has predominantly full-time residents (about 20,000), which gives the downtown a year-round bustling energy." So, it's no surprise that Portsmouth NH luxury condominium living is in such great demand!

Walking through the historic streets and buildings along Market Square, you'll find countless places to eat, drink, and shop. Portsmouth has emerged on the New England culinary map as a major dining destination halfway between Boston and Portland. Its booming restaurant scene has created a cultural vibrancy that attracts people from all over the world.

Portsmouth is known as one of Northern New England's hubs for arts and entertainment. The city is home to The Music Hall, Seacoast Repertory Theatre, Prescott Park Arts Festival, 3S Artspace, and an abundance of small art galleries. You'll also find Strawbery Banke, a living history museum of Portsmouth life from the 17th century through the mid-20th century. And there is no better place to enjoy the natural beauty of the area than Prescott Park, which is filled with gardens, walking paths, water views, room to dock boats, and seats to have a picnic.

Since January 2016, there have been at least24 sales of Portsmouth NH luxury condominiums with prices exceeding $1 million. Average Sales Price: $1,707,000. There is currently one(1) under contract and there are six (6)actively for sale.

Tate & Foss Sotheby's International Realty Principal Broker Tony Jalbert shares some insight, based on his own experience and discussions with other listing brokers:

"The historic downtown area from State and Bow Streets to the South End has always been in great demand and, more recently, buyers have flocked to the up and coming North End.A majority of buyers are looking for square footage between 2,000 and 3,000, and they are willing topay more for these right-sized units;some developers have actually reconfigured their floor plans to meet that demand. We've seen price per square foot increase year over year for the pastthree years, which is remarkable." 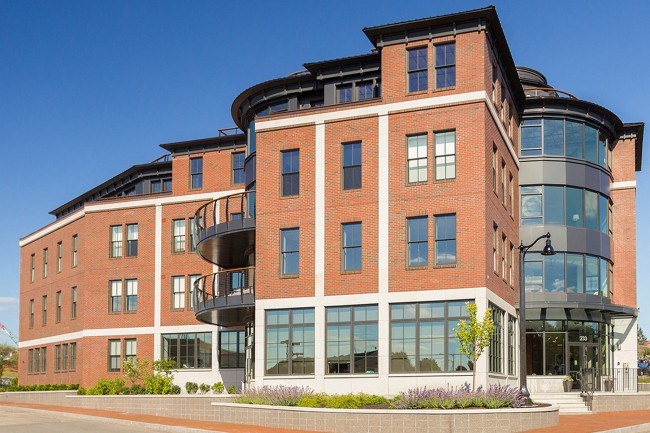 233 Vaughan Street Condominium is a collection of nine (9) magnificent residences offering turnkey luxury in the Northern Tier, the city's coolest developing neighborhood. The building is comprised of residential and commercial space with a private underground parking garage and has several high-performance features, including geothermal heating and cooling. Extraordinary lifestyle amenities include private rooftop terraces, a rooftop soaking pool, and a private fenced-in dog walk at ground level.

Since January 2016, there have been eight(8) sales with the following notable stats... 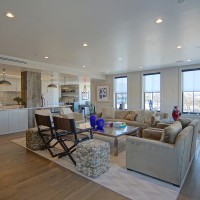 According to Listing Agent Andrea Swanson:

"Portsmouths luxury condos offer a wonderful blend of past and present. Exteriors are in harmony with the surrounding historic port city, and interiors have the most sophisticated modern elements. Having a background in high end residential project management, I can confidently say that the quality of condos in Portsmouth is uncompromising. Ive been involved with multi-million dollar residences in NYC, LA, San Francisco and internationally. The condominiums at 233 Vaughan Street possess the level of quality that you would see in these major markets." 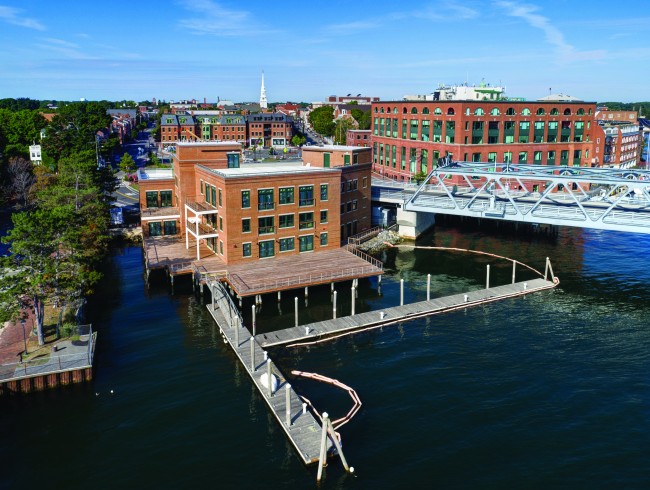 A Little History. Pier II was once the end of the Portsmouth Aqueduct, built in 1797 to carry water from the Sherburne wells through the city. Sailors bound for the sea would purchase their water here. And from the 1880s to the 1950s, the land was part of a coal wharf. In later years, a restaurant, Jimmy Canty's Fisherman's Pier, was built onsite. After a fire destroyed the building in the early 1970s, The Portsmouth Lobster and Fish Co. rebuilt...Pier II restaurant opened in 1972 and was a city icon for nearly thirty years!

Today, Pier II at Ten State Street offers a rare combination of Portsmouth NH luxury condominium living in a state-of-the-art, four-unit building on the waterfront with an onsite dock, where residents may lease a boat slip! To maximize soundproofing in this unique hub of activity, special windows and doors were installed and the building was foam insulated. Each unit has elevator access from a private garage to their residence and the building's 3,000 s.f. rooftop terrace, which was designed for hosting events(complete with lobby, two serving areas, powder room, and automatic retractable awnings)! 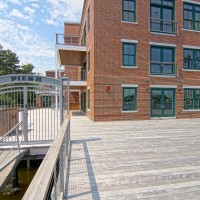 "To have a Portsmouth NH luxurycondominium in asmall, residential-only association in a new building directly on the river with access to an onsite dock...really is a very unique and exclusive opportunity. Not to mention private, street-level garage parking inside a gated courtyard. And, of course, panoramic views of an active waterfront, fabulous outdoor spaces and, just outside your front door, you have the green spaces of Prescott Park, Strawbery Banke and the new Memorial Park. In this location, what you see is what you get...you won't have to worry about new construction towering around you." 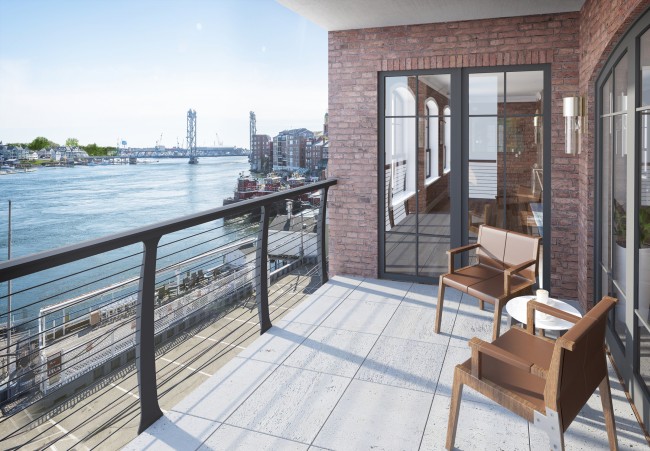 The six (6) residences at The Granary offer luxury living along the Old Portsmouth waterfront. The property offers a mix of residential and commercial space and is comprised of a restored 19th-century historic building with a complimentary new construction addition. The Granary bears its name in honor of its past use as a grain storage facility for the Frank Jones Brewery. Over three years of planning was spent consulting with Historical committees, experts & architects to seamlessly integrate the project within one of Portsmouths most cherished historical neighborhoods. 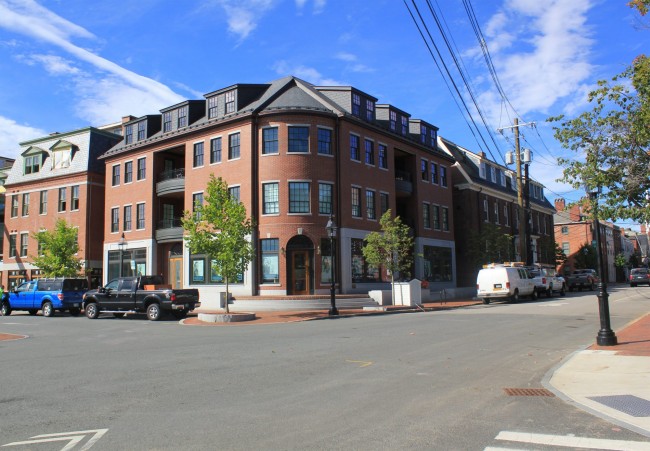 Once the Army-Navy Building (a military social hall) and later the Connie Bean Community Center (a hang out space for local kids), this little corner of Portsmouth has been transformed into a new, mixed-use development. Special residential features include a residents-only gym in the basement and a whole-building video-surveillance system. This attractive building's unique details include copper downspouts and flashing, local granite keystones and key arches, and authentic building features that were carefully restored (e.g. the wood banister along the central staircase, original wood windows, etc.). 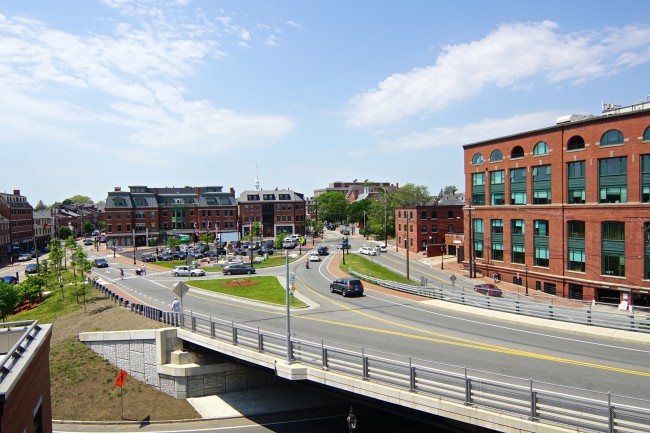 Facing the city's new Memorial Park, on the site of the former garage associated with The Rosa restaurant, you'll find mixed-use Parkside Condominium. The architectural design of this Mansard-roofed beauty has been described as 'innovative, yet respectful' of its historic surroundings. 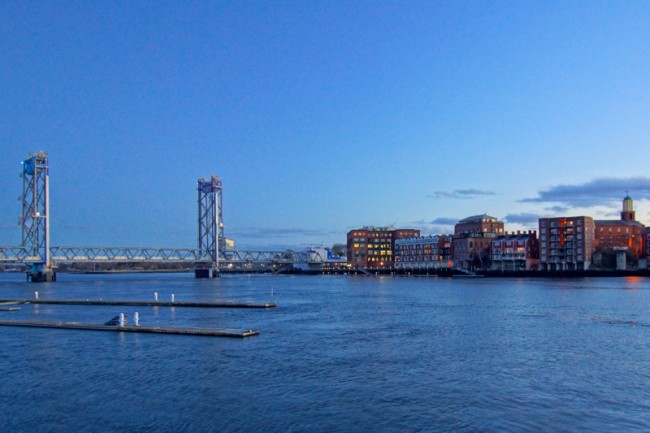 Tate & Foss Sotheby's International Realty was involved in what may be the most significant luxury condominium sale of 2017...117 Bow Street.

A Little History. Multiple units (including the former Warehouse Restaurant) were combined to create this exquisite four-level townhouse with a private elevator. Other notable amenities include a top-floor sky lounge, rooftop deck with hot tub...and the views!!! Simply stunning.This 5,616 s.f. waterfront townhouse sold in September for $3,056,000.

For more information about Portsmouth NH Luxury Condominium Living, please contact a member of our real estate sales team. At Tate & Foss Sothebys International Realty, we pride ourselves on having in-depth knowledge of our market area. Wed like to share that knowledge with you.