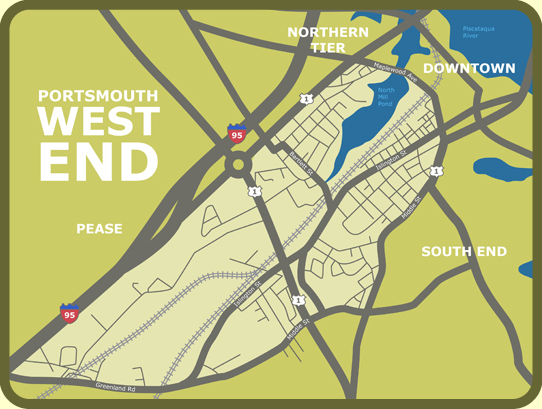 Once referred to as the 'most Brooklyn neighborhood' in the granite state for its trendy restaurants, thriving arts scene, and urban expansion plans, the West End, Portsmouth NH is the place to be. Especially in September, when business and residents celebrate 'Westival' a community with local bands and brews!

The boundaries of this up and coming neighborhood vary depending on who you ask, but the general consensus is that it begins at the edge of downtown where Middle Street and Maplewood Avenue intersect (you'll find Jumpin Jay's Fish Cafe and the Discover Portsmouth Center here) and stretches west toward Route 33. Bordered by Middle Street to the south and Route 1 By-Pass to the north, the West End's main thoroughfare is Islington Street.

According to the West End Business Association, the area has 140 businesses, 5000 residents, and 9518 things to do! Some of its notable commercial and mixed-use spaces include the Malt House Exchange (with Seacoast Sports Club-West End), Plaza 800 (home to Hannaford supermarket, a.k.a. Pic 'n Pay), and Gallagher's Place (where you'll find Street Food 360, a local restaurant with a cult-like following). Three of the neighborhood's most popular destinations, Weekender House home furnishings, Making Faces beauty boutique and MISSION fitness studio, are located here as well!

The West End, Portsmouth NH Commercial District is being further upgraded by Chinburg Builders as they convert two vacant warehouse buildings atFrank Jones Brew Yard into space for 68 apartments, businesses (our friends at Signature Title will be moving here soon!), and a restaurant. Chinburg's investment in the neighborhood demonstrates their confidence in a strong rental market, real estate asset appreciation and long-term economic vitality.

My father's business has been located on Islington Street for more than 30 years, so I have been keenly aware of the opportunities here. It is wonderful to see the neighborhood improvements becoming a reality."

Islington Street is the central artery of the West End, Portsmouth NH. You'll find some of the city's hotspots here, from Turkish coffee house Caffe Kilim to Lexie's Joint (where the mantra is 'Peace, Love + Burgers') and White Heron tea. 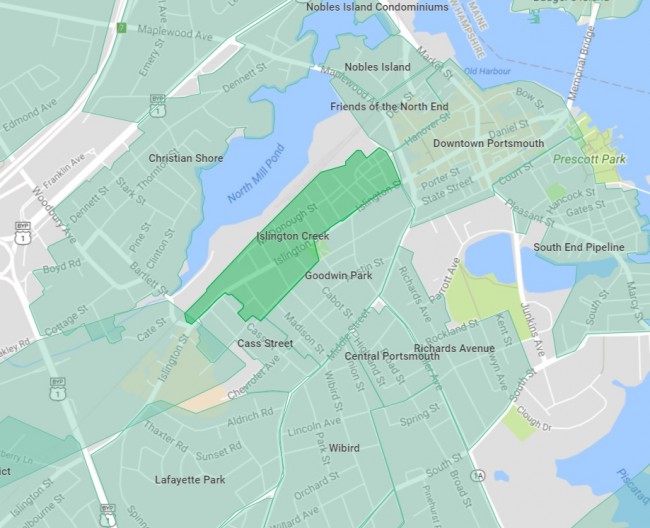 Islington Creek is comprised of properties mostly located between Islington Street and North Mill Pondlong an underrated neighborhood, it is in the midst of some significant redevelopment. 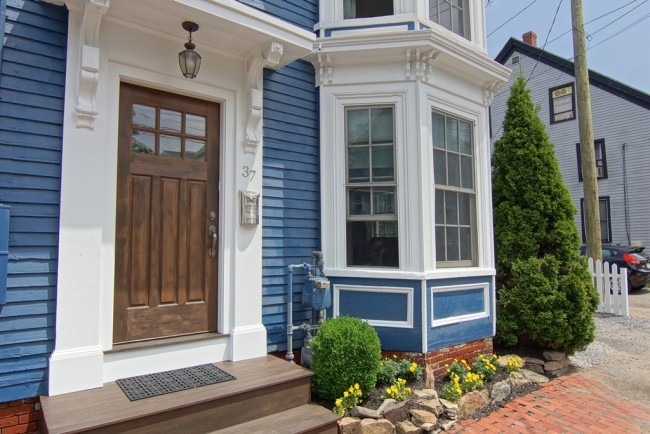 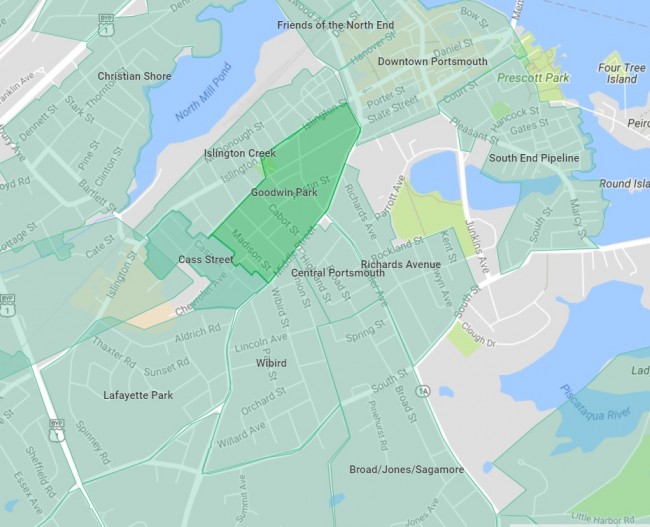 The Goodwin Park and Cass Street neighborhoods are ideally tucked between downtown, the Little Harbor area, and the West End, Portsmouth NH Commercial District. Over the last 2 years... -41 residential properties have sold at an average price of $459,138. -More than half (24)of these sales were condominiums the remainders were single families (12) and multi-families (5). 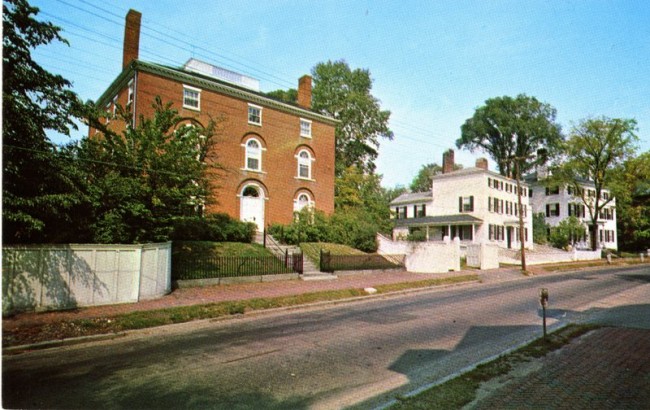 Tate & Foss Sotheby's International Realty Sales Associate John Rice brokered the sale of his old family homestead, the historic Larkin-Rice House at 180 Middle Street for $875,000 in October 2017. The property has an interesting history built in 1815 by auctioneer Samuel Larkin, who gained enormous wealth by selling captured British ships and their cargoes during the Wr of 1812! This once-grand mansion is a distinctive example of Federal period architecture, notable for its facade with five Palladian windows. Following the trend seen throughout the city today, the property is in the process of being converted to luxury condominiums. 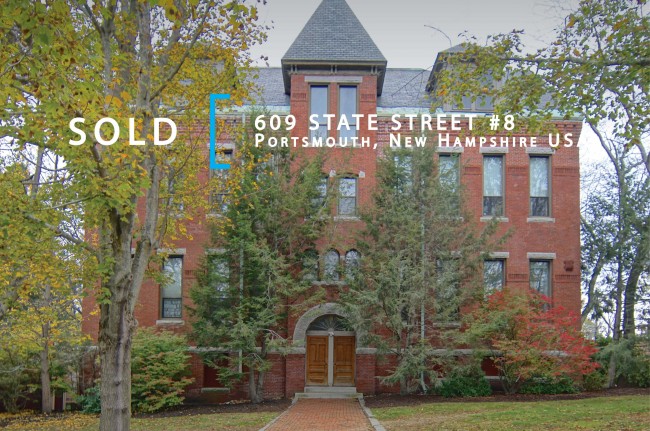 Sales AssociateBrett Mulveyrepresented a seller client in the sale of609 State Street #8 (Whipple School Condominium) for $440,000 in December 2017, commenting:

I lived around the corner from the Whipple Schoolwhen my daughter was born. We loved being close to downtown but able to access what we needed without leaving the neighborhood. The vibe is hip, young and lively and there is a real sense of communitywe found it to be veryfamily friendly." 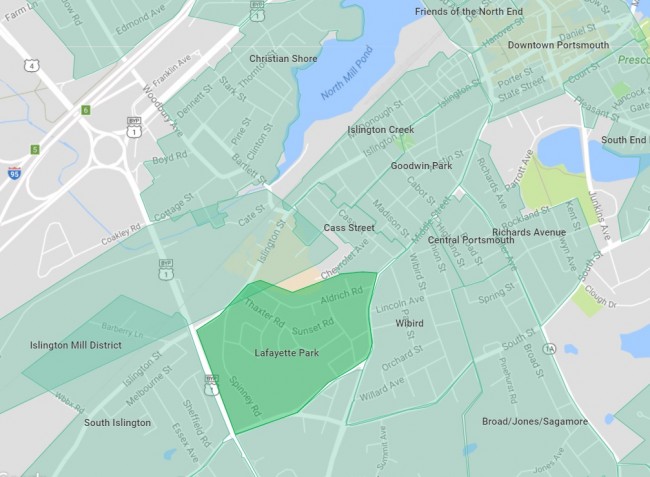 Lafayette Park is comprised of homes tucked between Islington, Aldrich, Middle, and Spinney...it's a wonderful neighborhood for walking and admiring the city's most charming stock of bungalows and Capes! And all of the conveniences of the West End, Portsmouth NH Commercial District are just around the corner.

Over the last 2 years... -22residential properties have sold at an average price of $589,728. -Only one of these sales was a condominium. -Three-quarters of the single-family homes sold were builtbetween1905 and 1968, with an average sales price of $530,445; the remaining quarter were built between 2016 and 2017, with an average sales price of $854,080. -All 5of the newer properties sold had an average of 2,900 s.f. of finished living space and were located in a new cul-de-sac neighborhood called Sanderson Fields. ~ 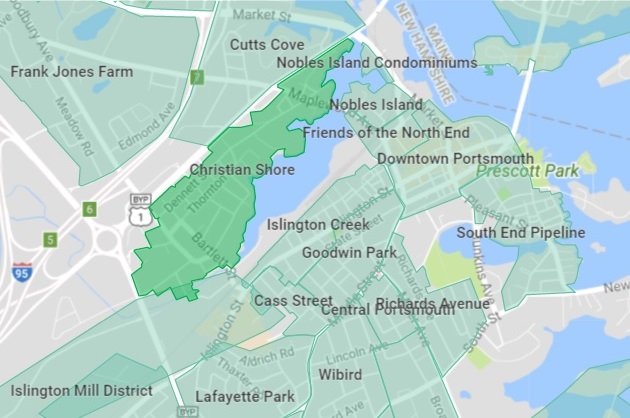 The Christian Shore neighborhood is ideally located where the NorthernTier and West End, Portsmouth NH intersect, along the shore of North Mill Pond. Residents claim it's the best commuter location in the city you can hop on and off the highway without the hassle of traveling through downtown. And those who are lucky enough to have access to the pond rave about the kayaking, canoeing and paddleboarding at high tide.

Over the last 2 years... -41residential properties have sold at an average price of $468,567. -Only 10of these sales were condominiums. - 6 of the properties sold had water frontage, deeded water access, and/or views of North Mill Pond; with an average sales price of $808,166. 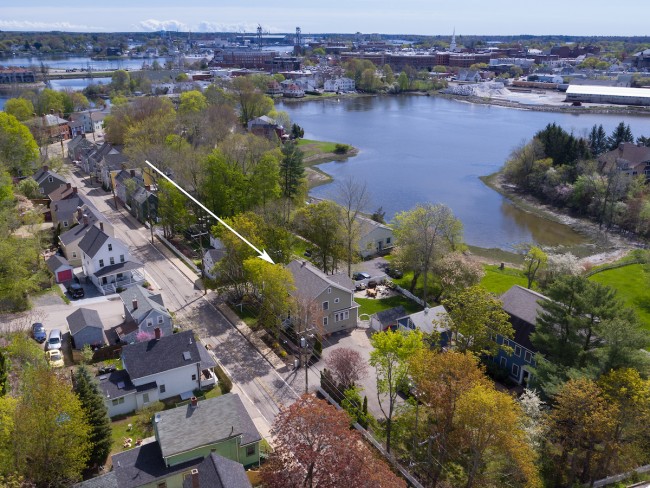 There's so much to love about this neighborhood...first and foremost, walkability. You can walk your children to New Franklin School in the morning or stroll downtown for dinner. With newer developments like Portwalk Place, downtown is expanding toward this part of the city. People who live here feel thatthere's a genuine sense of community...you really get to know your neighbors."

For more information about Living in the West End, Portsmouth NH, please contact a member of our real estate sales team. At Tate & Foss Sothebys International Realty, we pride ourselves on having in-depth knowledge of our market area. Wed like to share that knowledge with you.