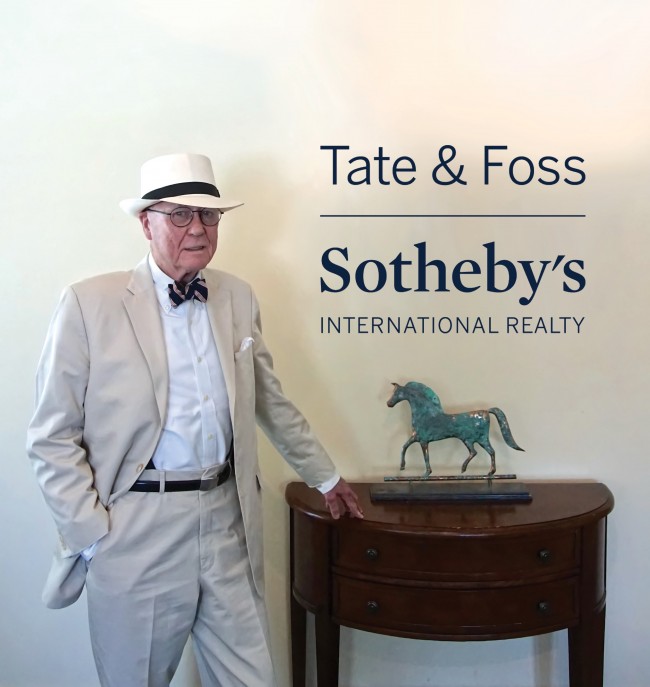 Meet Ned Tate, Rye historian, founding father of Tate & Foss Sothebys International Realty, broker extraordinaire, and last but hardly the least...dapper dresser. We had the lovely opportunity to chat with Ned one afternoon and he answered our questions with honesty, humor and flourish.

We first asked Ned to tell us one of his favorite stories of growing up in Rye.

In the early 1950s, my buddies and I loved watching the harvesting of ice from 3 local ponds in Rye - Lamprey Pond, Burkes Pond, and Browns Pond. We became experts as we skated around those ponds, watching men stack ice chunks between layers of sawdust and hay in mammoth ice houses. Even hot summer temps didnt touch the frigid ice houses, tempting us to make good use of this cold space and bragging about the rendezvous we held there. In between harvests, we raced jalopies on the Ponds, scaring our parents to death, Im sure. Better judgement prevailed by the 1960s and the sport was abandoned. Even without the jalopies, Ill never forget the tradition of ice harvesting.

This is just one of Neds many stories. He had been summering in Rye with his family since he was an infant and moved here permanently in 1945, when he was just six. He is a true Rye local who remains devoted to his community and committed to supporting its measured development, while tirelessly working to protect our beautiful Rye landscape.

Curiosity about any local property will undoubtedly summon a story that Ned will happily share. Weve never seen a memory so exacting or local expertise so extensive. Whenwe asked what his most memorable career moment was, he said:

Well, it was my biggest sale - the Lee House in North Hampton which sold for $8.5 million. Then just a month later a colleague and I sold a new house to the same buyer for $6.5 million. Not bad for a local boy.

Wehave always wondered why Ned decided to go into real estate in the first place and this was our chance. Gazing thoughtfully with head down and hands clasped, he said:

Sitting at the dinner table one night my father said that the easiest way to make money in the world is to be a real estate broker. All you need are some signs and then you collect the commission. I guess I believed him, but it didnt turn out to be quite that easy.

Although not an easy venture, Ned Tate makes the profession look effortless. Originally founded in Neds 1975 kitchen as E.H. Tate & Company Realty, the firms distinguished reputation was built on Neds honor and integrity. However, Ned is quick to credit his original partner, Patricia Foss, hence our evolution to Tate & Foss, with much of our reputation for quality service.

So, when asked what the most important attribute in real estate is, Neds answer is not surprising. Maintaining the highest ethical standards and providing exemplary service to our clients is our calling. He has set the standard for us and we all work hard to make him proud.

Likely the most delightful thing about Ned is his love of fashion and cars. He arrives at the office each day in a sharp three-piece suit, confirming that you can never underestimate the power and charm of a well-dressed professional. His collection of hats, almost all fedoras, tops 15. On warm summer days you can spot him riding the coast in his 1941 Cadillac Convertible listening to his favorite opera and sporting his signature fedora and bow tie. If youre lucky hell nod your way and shout,

isnt it a fabulous day to preview the coastline?